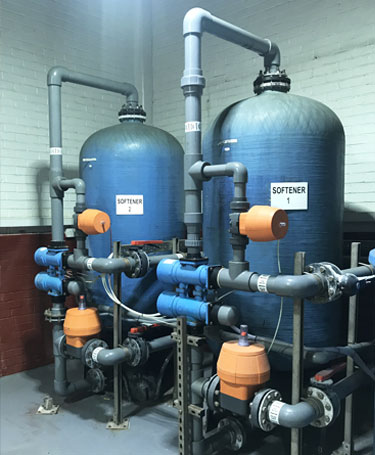 Water softening is one of the most basic forms of water treatment and involves the use of ion-exchange resin contained within one or more pressure vessels.

Water passes through the resin bed and the hardness in the water is captured by the resin beads. The resin swaps the hardness ions for sodium ions. Once the resin has done all that it can, it is said to be exhausted and it will be automatically regenerated using the control system.

The regeneration process involves a number of stages, one of which pulls brine from the nearby brine tank. The high concentration of sodium in the brine solution forces the hardness taken out during the last service cycle to come off the resin and this passes to drain. The resin takes hold of the new charge of sodium ready for the next cycle. Once the excess brine is rinsed away, the softener is ready for another service run.

Production sensitive processes usually have two units operating in duplex mode (like the ones in the photograph) so that one unit is always in service with the other either in regeneration or in standby. 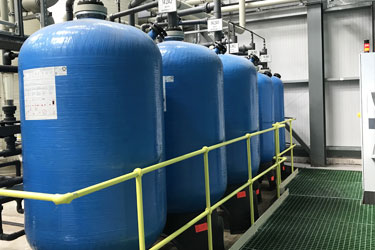 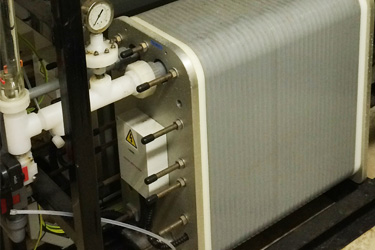 Choosing which method usually depends on the target quality as a single vessel with a mix of resins will produce a far higher purity. Due to the relatively complex control systems needed to operate the regeneration process of these so called “mixed-bed” units, they are usually more expensive than the more common and simpler, “two-bed” (also called “twin-bed”) units.

Unlike softeners that use common salt, regeneration of these resins is accomplished using concentrated acid for the cation and alkali for the anion. Because of the need to use these aggressive chemicals, this type of plant has become less popular. Users now tend to use a combination of technologies incorporating different stages to produce water that can then be economically “polished” using exchangeable mixed-bed cylinders to reach the levels of high-purity needed.

When exchangeable cylinders become exhausted, they are simply removed from the system and replaced with a fresh cylinder held on-site. The supplier will then bring another fresh cylinder to be kept on site ready for the next replacement and the exhausted cylinder is taken away by the supplier for recharging on their premises. Alternatively, the resin can simply be removed and responsibly disposed of on-site. Fresh resin is then put back in the cleaned cylinder ready for the next exchange.

Electrodeionisation (EDI) is a technique that uses electricity, ion-exchange membranes and resin to purify water. EDI equipment works without chemicals and is usually installed as a polishing treatment after reverse osmosis. EDI systems achieve very high purity with conductivity < 0.1 μS/cm. 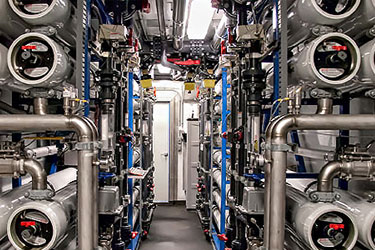 Reverse osmosis units have become more popular due to the lack of the need for aggressive chemicals and the falling price of membranes.

The process works by forcing the feedwater into one or more tubes under pressure which brings it into contact with high surface area membranes. Once in contact with the membrane surface, water molecules will pass through the membrane and out of the unit via the product line (also called the permeate or “fresh” in the diagram) leaving the other, larger molecules to pass out of the unit via the waste stream (also called the concentrate). 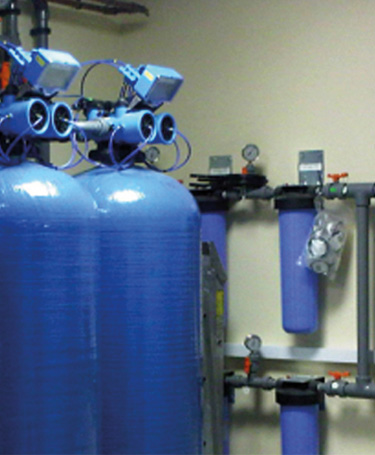 Filtration is used to either remove unwanted contamination using specialised filter media or to remove suspended particulate matter so as to protect downstream treatment processes such as reverse osmosis.

Filters such as the ones shown in the photograph will be automatically taken off-line at fixed times so the media can be cleaned. The fully automated cleaning process reverses the direction of flow so that the feedwater (or stored filtered water in specialist applications) flows up through the media causing the material filtered out during the last service cycle to be washed out and sent to drain. This process is known as “backwashing”. This also loosens and reclassifies the filter media and, if set correctly, prevents it from compacting during service. After backwashing, a short rinse cycle settles the bed ready for the next service cycle.

In production sensitive applications, filters will be installed in duplex configuration so that one unit is always in service with the other either in backwash or on standby.

Also shown in the photograph are some cartridge filters which can be used in conjunction with automatic filters and other treatment processes (these cartridges can filter down to sub-micron levels) or on their own where volumes are relatively low. When installing cartridge filters, it is important to be able to monitor differential pressure to avoid cartridges rupturing and sending high concentrations of particulate matter downstream. 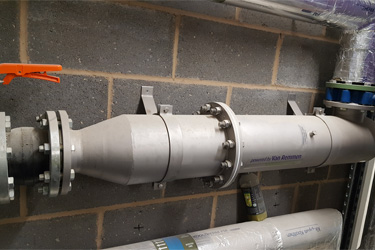 Ultra-violet sterilisation is used in applications where organic material, including bacteriological activity would be harmful to the process.

Most feedwaters will contain chlorine but processes such as reverse osmosis require this chlorine to be removed upstream in order to prevent damage to the membranes. Once the chlorine has been removed, the potential for bacterial growth is very high. If this is not
controlled, extremely high levels of contamination can quickly develop which often lead to undesirable slimes forming on the inner surfaces of pipework and tanks. This organic matter provides an ideal growth medium for the development of yet further contamination.

Strategic positioning of UV products and system disinfection procedures will control contamination and the build up of slimes.

In addition to the classic use for controlling bacterial contamination, UV is also used to remove other contaminants such as TOC (Total Organic Carbon) from high-purity systems.

Our highly skilled, time-served support engineers are strategically based around the UK and provide expertise with enthusiasm and a genuine interest in customer service.